Gabby completed her herding started  title on sheep at Keepstone Farm under judge Roy Johnson on July 2, 2016.
Posted by Leslie at 12:41 AM No comments:

Taylor lost his battle with hemangiosarcoma on 7/22.  He fought bravely for 97 days.  When he was originally diagnosed I had decided against chemo since it didn't seem to extend their life and my previous experience with chemo didn't go well.  We did homeopathic remedies provided by Dr. Loops and ozone treatments provided by Dr. Lundquist.  However after one month Taylor developed a pericardial effusion.  We performed the necessary procedure to prolong Taylor's life and then decided to pursue chemotherapy since it was felt that the cancer was now in his heart.  We started metronomic therapy with cytophosphamide, piroxicam and pepcid.  Taylor did very well on the therapy.  We were still doing ozone treatments as well.  We stopped the homeopathic treatment as it became apparent they weren't working and Taylor's disliked the treatment.  The whole purpose of the treatments was quality of life.  For the most part Taylor had great quality of life.  He was also on a lot of supplements.  When he was first diagnosed he was given Yunnan Baiyo 2 caps/2x/day.  There is an emergency red pill in the middle of the packet for bleeds.  We did use those pills on occasion.  He also received I'm Yunity, milk thistle, l-arginine, l-glutamine, life gold, milk thistle, nupro, probiotic max, turmeric, fish oil, coconut oil, apple cider vinegar, and liposomal vitamin c.  When the end came it came very quickly.

Taylor was my first grand champion and herding titled dog.  We tried to compete in agility but he was never titled.  He was a lover boy who thought that everyone should just love him.  One of my vets would refer to him as "surfer dude".  He could be a great partner or not when we competed due to his mischievous streak.
Posted by Leslie at 12:34 AM No comments:

All 4 dogs have been taking herding lessons at Keepstone Farm in Berryville, VA.  Taylor is finally understanding that we are a team and he has been doing some nice work.  We have been letting Sabrina have a good time and will start working her soon.  Harry is not fond of the sheep so we have given him a job to do -- he pens the sheep and is a very happy dog.  Gabby is a very exuberant puppy.  She knows what to do and Susan is very pleased with her.  However, we need to work on team building and direction.
Posted by Leslie at 8:26 AM No comments:

Harry passed his herding instinct test in May at the American Boerboel trial. We tried to get the second leg of Taylor's  PT (Pre-Trial tested) title but it was not meant to be.  Taylor hasn't wanted to work in the heat.  We have been struggling to get that one last leg.  We will not be trialing again until September.  Hopefully the cooler weather will give him a little more enthusiasm.
Sabrina and Harry are working on their titles as well.  Harry prefers ducks to sheep but is starting to show more enthusiasm for the sheep.  We're not sure if we are going to trial either of them on HT or just go to PT.
Sabrina is finally willing to take direction and shows a willingness to learn.
I'm very pleased with the herding ability of all 3.  This has been a big learning curve for me as well.  So many things to keep in mind.  I not only have to learn to read the dog but the sheep as well and they are not always willing to participate!
Posted by Leslie at 8:41 AM No comments: 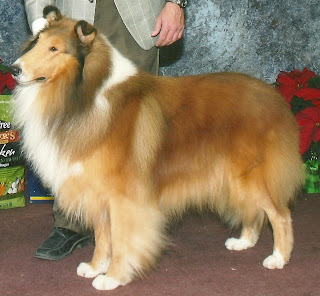 Taylor is now CH Marnus Keuka Gold of Whitemoor, HT.  He completed his championship in December at the Forsyth Kennel Club show under judge Linda More with Nick showing him.  He looked great.  Linda loves his head.  Taylor will come home for awhile for some needed rest.
Posted by Leslie at 2:10 AM 1 comment:

Taylor received his HT (Herding Tested) title at the CCA Eastern Regional Herding Trial under judges Deb and Roy Johnson,  Sabrina passed the Herding Instinct Test.  Harry got one leg of the Instinct test but unfortunatley he had an off day on Sunday and was not able to pass.  He is not particulary fond of the sheep but he loves the ducks.

The Northern Virginia Collie Club provided the food for the trial and held a 50/50 raffle.
Posted by Leslie at 2:07 AM No comments:

Another point for Taylor

WD on Wed at Northern Neck Kennel Club in Fredericksburg.  Judge Linda More commented that he had a very leand long head.  Taylor now has 4 points.
Posted by Leslie at 1:30 PM No comments: